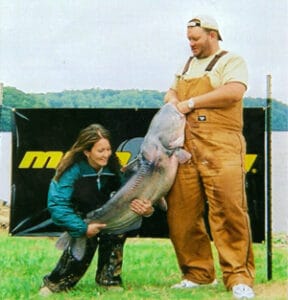 Cold water fishing for trophy cats from November to February on the Coosa River.

Greg Ledbetter’s enthusiasm for winter fishing on the Cossa River is easy to understand given his success. In less than four hours, he caught a stringer of seven catfish from Logan Martin weighing more than 300 pounds. The smallest fish weighed more than 40 pounds. Ledbetter caught his biggest Coosa cat from Neely Henry; it weighed 61 pounds.

Ledbetter and his wife Kim of Wellington fish between 20 and 25 catfish tournaments a year. All fish are released, and all are caught on rod and reel. Their straightforward methods target trophy fish.

These tournament pros catch good numbers of big fish in November and even bigger fish in January or early February.

“Winter is big fish season,” declares Ledbetter. “In November, the water is cooling, so catfish are preparing for the cold. Unlike spring, they are not concerned with breeding so do not have lockjaw. Blues feed often and aggressively in November. During a feeding frenzy, they are like sharks!

“The time to fish for trophy catfish is during the coldest weather in January and February. Blues do tend to get lethargic in cold water, but they continue to feed through winter, and that’s how they reach massive weights. You may fish for two days and not get a bite and then all of a sudden catch a world record. We always catch our biggest fish in the dead of winter.”

Before cold weather blankets the Cossa Valley, this husband and wife team looks for cats in open water on the lower sections of the lakes they fish. Ledbetter says blues cruise over an uneven bottom looking for balls of baitfish.

“Look for small humps, creeks junctions or any variation in the bottom,” Ledbetter advised, “even if it’s only a difference of 3 feet. The key to finding big fish is a change in the bottom in open water.”

When winter sets in, Ledbetter searches steep dropoffs on the main river channel, especially at the mouths of feeder creeks.

“Many anglers make the mistake of fishing the deepest water,” he cautioned. “Look for an area of incoming current that offers catfish warmer water and food. Due to the lack of oxygen in deep water, the 30 to 40 feet range has the best fishing in winter.”

Whether fishing open water in late fall or the river channel in winter, Ledbetter stressed the importance of finding shad with your sonar. “If they are not present,” he said, “you just about have to beat catfish over the head to get a bite.”

But the opposite is true if you find shad in combination with white bass or hybrids.

“They hit shad by swimming through a huge pod,” said Ledbetter, “and it causes the injured shad to fall to the catfish waiting below. If you fish in winter, you can see it on sonar. You’ll see a large pod of bait and smaller echoes at about the same level. Then you’ll see large echoes, which are big catfish, below the action. When this happens, you can really lock into some monsters.”

Ledbetter’s method for catching big blues early or late is to drift his boat slowly over the shad looking for actively feeding fish. It’s a sideways drift with six rods to cover more area. If the wind is stronger than 12 mph, he uses a drift sock to slow the boat. Otherwise, he relies on the six sinkers dragging the bottom. Sinker weights vary with the force of the wind and range from ½ to 6 ounces.

Ledbetter spools his Abu Garcia 7000 reels with 30-pound-test Berkley Hi-Test monofilament, which is tied to a three-way rig. To the swivel, he ties a 20-inch leader of 80-pound-test line with an 8/0 circle hook. Twelve inches of line attaches the sinker to the remaining eye.

He baits all hooks with fresh cut shad, carp or skipjack. Ledbetter said skipjack outperforms all other baits.