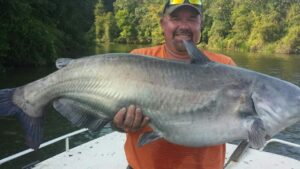 Well-known catfish tournament angler Jody Atkins of Pittsview lives a very short distance from the Chattahoochee River above Lake Eufaula, yet drives to Lake Andrews when he is serious about catching cats.

“The first time I fished the lower river,” says Atkins, “I anchored above a point, and while baiting my second rod the first rod almost got jerked out of the boat. That fish weighed eight pounds. I made a cast with my second rod and immediately caught a six pounder.

“Normally, I catch three blues to every seven channel cats,” Atkins said. “My biggest channel weighed 17 ¾ pounds and my blue weighed 36 pounds. In the last three years, the numbers of catfish weighing more than 20 has increased. An average fish, though, weighs three pounds.”

Atkins says there’s so many catfish in the lower river that finding fish is not difficult. To target big fish, he looks for outside bends, points and logjams. Productive bends have deep washout holes. Points, no matter how short, cause a break in the current – places where fast and slow water exist side-by-side. Logjams also deflect the current; additionally, they provide concealment for ambush.

“Usually, the water drops off quickly next to the bank,” Atkins said, “so I tie to a limb or throw my anchor onto the bank. Then I ease out rope to fish straight down below the boat. When fishing directly below the boat, your sinker will not roll and tangle on the bottom, and you will land more fish. I fish bends, points and heavy timber this way.”

Since Atkins fishes in a strong current, being able to precisely position his boat and bait is important.

“In late summer,” he said, “I like to start fishing in the late evening. I call to find out when they will operate the generators, and then leave in time to catch shad and set up on the first hole I want to fish before they start moving water. As soon as they start generating, the fish turn on.”

Atkins rigs fresh cut shad on two 6 1/2–foot baitcasting rods capable of handling sinker weights of two to four ounces. He fills the reels with 20-pound test and uses basic slip-sinker rigs with short six-inch leaders tied to 4/0 hooks. The short leaders limit how much the baits spin in the current. Since bites on the lower Chattahoochee come often and hard, Atkins fishes with only two rods.

During competitions on Lake Andrews, Atkins supplements his two rods with limblines and set poles fished in the same locations.

To fish the river below the Andrews Lock and Dam, access is available near the town of Gordon off State Highway 95.

Alabama and Georgia recognize the licenses of each state for anglers fishing below Lake Eufaula; however, the agreement does not cover the creeks flowing into the Chattahoochee River.

Brandy and Jody Atkins interview on Catfish Weekly! They share how they catch huge catfish.