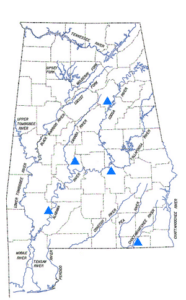 Flathead catfishing in Alabama offers angers an opportunity to catch trophy fish weighing more than 40 pounds as well as good numbers of these delicious fish. Fortunately, flatheads are widespread across the state, and their range is expanding.

Of the many great catfish destinations existing throughout Alabama, here are five excellent choices. Two are on the magnificent Alabama River, one is on the Coosa River and two are on the smaller Cahaba and Choctawhatchee rivers.

Perfect habitat and low fishing pressure make Millers Ferry a top destination for flathead catfish. The fertile waters of the Alabama River combined with the many sweeping river bends filled with snags and logjams provide prime holding areas for the secretive adult flatheads. Due to Millers Ferry’s distance from metropolitan areas, flatheads do not receive significant recreational fishing pressure, nor do they receive substantial harvest from commercial fishing.

Night fishermen catch good numbers of yellow cats weighing up to 30 pounds on bait casting rods, limb and trot lines. To cover as much water as possible, arrive on the water before dark to set limblines upstream from the bends in the river. Then anchor upstream from a logjam or a creek mouth for a night of fishing with rods and reels.

Unlike blue and channel catfish, flatheads are predators. Most anglers use live bream, but bullheads catch more fish.

As summer temperatures hover above 95 degrees on Claiborne Lake, the days becomes insufferable, and the most productive time to catch flatheads is at night. Catfish anglers on Claiborne wait for the sun to sink below the trees before working the banks. They then use the remaining light to tie their limblines to overhanging branches.

Claiborne is the last reservoir on the Alabama River. The lock and dam, which is near Monroeville, did little to change the look of the great Alabama, as it failed to flood the river’s steep banks.

Claiborne’s catfish feed best when the water is moving.

During summer, Hagan fishes the upper riverine section of the lake between the I-20 Bridge and the Neely Henry Dam. The current on this stretch of lake positions catfish in classic locations.

To find fish holding habitat, Hagan uses down-imaging sonar to locate current breaks formed by snags or rocks. However, his favorite current breaks are the depressions on the bottom. Hagan says the latter has the greatest potential to hold big fish.

Flatheads are not native to the Choctawhatchee River, which begins in Barbour County and flows into Florida south of Geneva. Fisheries biologist began seeing the yellow cats in the river in the late 90s, and they have now expanded their range upstream to Newton.

Ken Weathers, District IV fisheries supervisor reports finding flatheads weighing from 2 to 38 pounds while shocking their habitat on a lower stretch of the river. “Anywhere there was a deep hole from 12 to 24 feet with debris in it, there were flatheads,” he said. They like to lay in the deep holes under structure. Once we got past the junction of the Pea and Choctawhatchee, we found plenty. Also, it is where we found the bigger ones.”

Public boat ramps are available at four locations on the river from Newton to the river junction in Geneva. For maps to their locations, visit www.outdooralabama.com.

The Cahaba River is the longest free-flowing river in the state, and it is also our most biologically diverse river. Known for its beauty, the Cahaba’s swift water, rock bars, deep holes and cypress trees is also a solitary place to catch flathead catfish.

From Centerville to Selma, the river holds an excellent population of yellow cats from pansize to 35 pounders. The best baits are live bullheads and bream.

To catch these delicious fish, work snags in the channel and eddies along bank. Also, fish the deep holes on outside bends.

Ramps on the lower Cahaba are located in Centerville, Sprott, and Cahaba, which is just above the Alabama River. Most anglers, though, slide their johnboats down the riverbank at highway bridges.