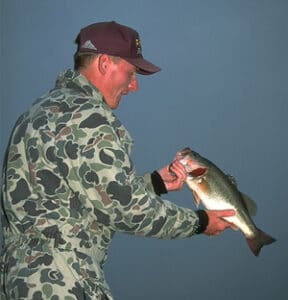 David Hagan has fished Millers Ferry since 1971 and knows more about catching its cold-water bass than anyone on the Alabama River. Anglers from Camden to Selma love bass fishing, but few leave the woods in January to wet a line. Although, Hagan says he’s beginning to see more fishermen on the lake.

“In the 80s,” Hagan recalled, “I could ride for 40 miles on the lake and never see another boat. Now that anglers realize how much fun they can have, I sometimes see a dozen boats by mid-morning.

“Winter is my favorite time of the year to fish because it’s just more fun to catch big fish. A five-fish stringer that weighs 20 pounds in winter only weighs about 12 pounds in summer. You catch fewer fish in winter, but you catch quality fish.”

Hagan’s big-fish structure differs greatly from what most Alabama anglers fish in winter. He concentrates on the lower section of the lake but avoids the main channel. On Millers Ferry, Hagan has found the best fishing in creeks with expansive flats.

Creeks produce better than the main channel on Millers Ferry as the water is warmer. Reservoirs on the Alabama River have low retention times – the amount of time the lake holds a particular unit of water – so the riverrun channel is cold in January. Hagan targets creeks with broad flats and stained water that warm much faster than the main lake during a warming trend.

When deciding which creeks to fish, Hagan says spawning flats are the key to success. Find where bass reproduce, then backtrack to locate deep-water structure. He says Pine Barren, Mill and Shell creeks are examples of the type structure that produce in winter.

“Spawning flats are the secret,” Hagan revealed. “All the lake’s big fish relate to spawning flats. If there’s a bend in the creek 30 feet deep with a spawning flat nearby covered with four feet of water, 90 percent  of the time you’ll find them in the channel. When the water warms up, the fish move vertically in the channel and then swim onto the spawning flat.”

Hagan describes an ideal winter fishing spot as a creek channel 15 to 30 feet deep with an outside bend close to the bank. Additionally, a migration route connects the creek bend to the spawning flat. A feeder creek, a ditch or depression offers security to bass moving to and from the flat, plus perfect concealment to ambush bait moving across the route. As always, the more cover you have on the creek channel, migration route and spawning flat, the better the fishing.

Surprisingly, Hagan pointed out that with the temperature swings possible in January anglers might find bass suspended deep in the creek channel, on the migration route or even roaming the flat.

The last ingredients necessary for success are low current flow in the creek and the presence of shad. If Hagan does not see shad on his sonar or flipping on the surface, he doesn’t stop to fish.

“If you find shad in the bend of the creek channel,” Hagan advised, “the bass will usually hold near the bait. Fish a jigging spoon vertically if the water is clear enough for the fish to see the spoon. Always have a rod rigged with a spoon.”

Of all Hagan’s winter patterns, vertical jigging for fish in the channel requires the slowest lure presentation.

If bass are not in the channel, Hagan searches the top of ledges and sides of the channel on both the outside and inside curve of the bend. The inside curve forms a point at it’s apex.

“Fish positioned on top of the ledge are actively feeding.” Hagan said, “If they are on the sides, they will strike but not aggressively. The fish on top of the point are easiest to catch.”

Hagan targets bass in both situations with a dark colored jig weighing 3/8 to ¾ ounce. For maximum visibility and vibration, his trailer is super sized. This lure produces most of Hagan’s big fish.

“If fish are aggressive,” Hagan instructed, “you can fish faster so use a heavy jig. For really cold water with lethargic bass that will not move far to hit a bait, use a light jig. It stays in the strike zone longer, because you can work it slower.”

To work the sides of the creek channel, Hagan positions his boat so the jig moves at an angle to its sides. And though bass behavior is neutral, he often catches big fish in deep water with this presentation.

Depending on the movement of fronts and the length of warming trends, Hagan reports that fishing conditions can quickly change on Millers Ferry.

“At times, water temperatures increase by 6 or 7 degrees on those flats,” he said, “but a 2 or 3 degree swing can mean the difference between an empty and full livewell. After a few warm days, shad move up on the flats and bass follow them. If I find shad flipping on the surface, I can catch bass.”

Hagan targets fish on migration routes by fishing a crankbait, jig or spinnerbait perpendicular to its direction. As his lure breaks over the edge of the drop, even if it’s only 18 inches, it often triggers a reaction strike from fish.

“Fish the ditch going back to the flat,” instructed Hagan, “because they are aggressive and easy to catch. When bass swim out of the ditch, they scatter over the flat to hold under vegetation and next to wood cover.”

This is where Hagan caught a 9-pound, 7-ounce bass from hyacinth in 49-degree water. Air temperature was 38 degrees. He first fished the ditch onto the flat and then switched to a 1½-ounce jig to flip the thick cover.

“She was under the hyacinth enjoying the warmth and feeding on crawfish,” Hagan revealed. “She had whiskers sticking out of her throat, so you know why she was there. I released her back into the hyacinth hoping I would catch her again during a tournament.”

When you find largemouth on the flats, enjoy the experience. Hagan says as soon as the next cold front rolls across Millers Ferry, it’s back to creek channel to fish for suspended bass until the next warming trend. Fortunately, the trends linger a littler longer as we move toward spring.