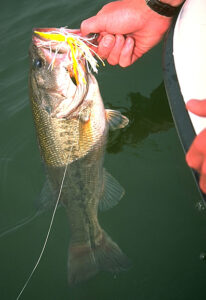 “It’s not a very good month to fish overall,” reports Damon Abernethy, Assistant Chief of Fisheries for the Alabama Department of Conservation and Natural Resources. “Catch rates are low, but your chances of catching a really big fish are pretty good in January. If you can stand the cold, you can do real well in winter. I prefer to fish when it’s cold.”

Abernethy continued by pointing out that bass are cold blooded, which makes them less active and less likely to strike in cold water. In fact, biologists have found a largemouth’s metabolic rate falls by a third of its previous rate for every 18-degree drop in body temperature. As their temperature falls from 60 to 50 degrees, the time to digest a meal of shad may increase from 4 days to 6 days.

Though bass digest food at a slower rate, they do eat through January and appear healthy, well nourished and ready to spawn in February.

Also, observations by biologists confirmed what anglers have learned in their laboratory of hard knocks: bass become increasingly more sluggish as water temperatures fall to 50 degrees and then markedly so in the mid to upper 40s.

Ryan Ingram of Phenix City qualifies as an expert on Lake Eufaula’s bass. He has fished the lake for 33 years and frequently wins or places near the top of the tournaments he enters.

“By far,” Ingram offered, “Lake Eufaula is your best opportunity to catch a 6-pound bass in the southern part of the state. It’s leaps and bounds above any other lake around here.

“Fish form groups in January and February just like they do in the heat of summer. If we have a cold January, you can catch 20 to 25 fish a day and about half of those will weigh between 5 and 7 pounds. The fish may hold on the same ledges as in summer, but deeper. And the larger the group, the better your chances of catching a big fish.”

On a cold day in January a few years ago, Ingram caught a 10½-pound largemough bass from a deep-water ledge. Within minutes, his fishing partner hauled another hawg into the boat. It weighed more than 9 pounds.

Since bass on these ledges are of various sizes and big fish behave more as individuals, Ingram refers to the aggregate as a group instead of school. The species may vary as well.

“While fishing a ledge in 20 feet of water,” reported Ingram, “you might catch a three-finger bluegill, an 8-pound bass or a 25-pound catfish. Everything is there together.”

In winter, bass seek structure that provides food, security and a stable environment. As water temperatures drops on Lake Eufaula, fish move deeper and form even larger groups as the availability of ideal structure decreases. Instead of 75 possible spots holding bass at a depth of 20 feet, there may only be 10 spots available at 28 feet.

Ingram advises anglers to look for fish on ledges or humps 20 to 28 feet deep. To fish structure and cover at these depths, he targets the lower section of the main lake below White Oak Creek.

“On that end of the lake,” Ingram noted, “it’s basically impossible to catch a fish except in the cold winter months.”

He says anglers can find fish by searching the depths with sonar or by dragging a lure on the bottom. When using sonar, Ingram looks for groups of bass, but admits it’s often difficult to read fish hugging the bottom.

His fish-finder lure is a Texas-rigged, 10-inch worm in a dark color behind a ¾-ounce sinker.

“You could use a jig,” Ingram explained, “but a worm just works better. Many anglers don’t believe bass will bite a worm that early in the year, but it’s the best way to find largemouth when it’s cold on Lake Eufaula.

“Keep your boat in 20 to 25 feet of water and drift down the ledge. If you have a light wind, drift along the ledge, dragging the worm on the bottom. You may cover a good distance before getting a bite. When you do, stop and fish. Maybe it’s the only bite you’ll get, or it could be a 100 bites.”

Especially in winter, bass hold in a location for a reason, so it’s worth your time to thoroughly work the area before moving.

If fishing for fun, Ingram recommends working the ledge vertically with a ¾-ounce Hopkins jigging spoon. The spoon is an efficient deep-water tool, but Ingram avoids the lure while fishing tournaments as he looses too many fish on the way to the boat.

Instead, this tournament champion prefers to slow-roll a 1½-ounce Ledgebuster spinnerbait with a large willow-leaf blade just inches off the bottom. Ingram believes the lure gives him an edge for catching big fish. The spinnerbait has fooled bass weighing up to 10½ pounds.

The key to fishing the heavy spinnerbait is its closeness to the ledge. “In winter,” Ingram said, “the fish are stuck to the bottom. They will often have mud on their bellies when they surface.

“When proficient at fishing a single willow-leaf spinnerbait in deep water, you will occasionally feel it bump the bottom. If you can’t feel the blade turning, let it fall to the bottom and then pick up the retrieve again.”

A critical aspect to fishing deep ledges is boat position.

“In winter,” he continued, “do not position your boat too close to the side of the ledge: the only fish you will catch are the active fish on top. Allow enough distance to work both the top and side of the ledge.

“Also, consider the angle of your casts. If you make a cast straight into the ledge, your lure will only cover a small section, but if you cast at an angle, the lure covers a larger area. Plus, you are able to keep the bait on the bottom longer.”

Ingram always positions his boat on the downriver side of the ledge. As bass face into the current, this allows a natural presentation of his lure. It also permits him to fish the spinnerbait from shallow to deep and remain near the bottom longer.

When fishing ledges in winter, Ingram pointed out that anglers frequently make two mistakes: fishing too shallow and putting too much pressure on a group of fish.

“If you find a group of fish,” Ingram cautioned, you can catch them for months, or you can ruin them in a day. With enough fishing pressure, they will either stop striking lures or they will move.

“When I caught the 10 pounder on the south end of the lake, we had been catching a mixed bag of spotted bass and smaller largemouth. The fish quit biting so we fished a few more places and returned. On the first two casts, we caught one over 10 and another over 9.”