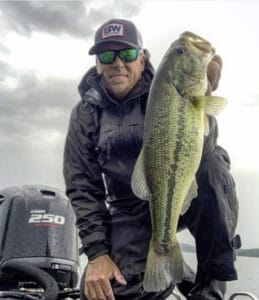 “Other than February,” said Russ Lane of Wetumpka, mid-November to mid-December is my favorite time of the year to fish Jordan.”

Lane is a professional bass angler who honed his skills on the 6,900-acre lake, which is located north of Wetumpka. He previously competed in the Bassmaster Elite Series and is now a competitor on the Major League Fishing trail. Lane’s winnings exceed one-million  dollars.

“It’s just before the coldest part of the year,” Lane continued, “so the shad are less active and easier for the bass to catch. They are feeding aggressively getting ready for water temperatures to drop into the high 40s.

Lane’s primary patterns pivot on flowing water. He says current is essential for success when fishing for spotted bass. Alternatively, when the turbines are still, Lane switches to fishing for largemouth.

“The most important factor for spotted bass this time of the year is current,” Lane advised, “and the best current flow occurs in a three- to five-mile (riverine) stretch below the Mitchell Dam.

“Many anglers think spots move to the bank in the current, but that’s not necessarily true. That time of the year big fish use bottom structure – anything that breaks up the current flowing across the bottom – and they may be 20 feet deep.”

Lane said little points along the banks that extend to the bottom or rock piles in the middle of the river often hold big spots. Of course, presenting a lure that deep in a strong current requires the right lure and technique.

“Use a one-ounce  spinnerbait rigged with two No. 4 willow-leaf blades,” Lane said. “It’s important the entire bait, including the blades, be a chartreuse color.”

To cast the heavy lure, Lane uses a 7-foot rod for distance and 16-pound-test fluorocarbon line for depth.

“Start with your boat upstream from the bottom structure you want to fish,” Lane said, “then make a long cast against the current. By the time your boat drifts back across the current break, your spinnerbait should be on the bottom.

“The spots strike so hard that they knock slack in your line.”

To target Jordan’s largemouth, Lane transitions to piers and boat docks. If it’s sunny, he skips a 3/8-ounce jig rigged with a twin-tail grub into the darkest shade underneath docks. Under overcast conditions, Lane swims the jig, using a hopping motion, down the sides of the pier. He says the fish hold on the back or front corner, and that you will see the strike.

For current fishing conditions, call or visit Stoddard Bait and Tackle in Wetumpka (334) 478-3899.