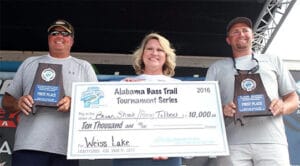 When Brian Shook and his partner Randy Tolbert, Jr. won the first Alabama Bass Trail team tournament on Weiss Lake, their winning pattern produced 23.25 pounds with the big fish of the day weighing 7.31 pounds. Both second and third places weighed in more than 21 pounds each. As you can see, Weiss offers exceptional bass fishing in June.

Weiss Lake is the first of six Alabama Power Company reservoirs on the Coosa River and stretches for 39 miles from Georgia to the Weiss Dam Powerhouse in Cherokee County. This dam is separate from the Weiss Dam, which is upstream from the powerhouse pool. In addition to the Coosa, the dams control waters from the Chattooga and Little rivers as well as many creeks.

Shook is an angler who takes the challenge of offshore cover, currents and structure seriously. He wins tournaments by doing his homework.

“When learning to fish offshore,” said Shook, “resist the urge to just fish. It’s best to leave the rods in the locker and log seat time learning the lake by reading your electronic maps and watching your sonar. Plan to ride half a day and fish the other half. While learning new lakes, we may only make a few dozen casts in a day.”

As good as down and side scan imaging is at showing underwater features, it does not compare to seeing how they relate to each other without water. Shook found the place that produced the biggest fish of the June tournament by riding his four-wheeler on the dry lakebed during the extreme drought of 2001. He took photos and made a scrapbook, which is invaluable. This spot and the others allowed Shook and Tolbert to cull 11 fish weighing more than 3 pounds on tournament day.

Shook’s ideal offshore spot is where the river channel meets a shallow flat that holds cover or some type of structure that forms a current break.

“The most important factor,” explained Shook, “is cover or structure. Largemouth and spotted bass on Weiss relate to structure, which are stumps, docks, grass or submerged roadbeds. We focus on anything in the immediate area where flats drop off into creek and river channels.

As you search for a place to fish, Shook says the size of the cover or structure is unimportant. During the tournament, a single stump produced several fish. He doesn’t look for bass on the cover, but he does look for baitfish.

“Having baitfish on the spots helps tremendously,” Shook said. “However, you don’t always need them, as a strong current will pull the baitfish into these places.

“Current always helps as it makes bass more aggressive. Also, they hold tighter to the cover, which makes them easier to catch due to you knowing the exact location of the cover. With a lack of current, they tend to scatter and suspend, so they are more difficult to catch. On the day of the tournament, we had very little current.

“But we did have high winds of 20 to 25 mph and waves breaking repeatedly over the bow. Without my Triton 21TRX, we would not have been able to fish offshore. We had no competition offshore.”

Shook and Tolbert’s lures for offshore fishing on Weiss are crankbaits and football jigs. Typically, they use a ½-ounce jig, but weights are commensurate with the current. Their crankbait selection depends on the depth of the bottom.

“The key to fishing a crankbait,” said Shook, “is to use a crankbait that runs deeper than the bottom. To fish a bottom 15 feet deep, do not throw a lure for that depth. Instead, use a crankbait rated for 22 feet that will bump the bottom consistently and create a reaction strike.

“To fish the jig, try dragging it on the bottom. If that doesn’t draw a strike, stroke the jig. It depends on the fish. Due to the lack of current during the tournament, we had to stroke the jig.”

Tolbert’s confidence jig is Dr. Dave’s Bass Candy Football Jig by Black Angel Lures. Shook’s is a brown and green pumpkin Weiss Special by Shooky Jigs, which are made by his son. They dress their jigs with Strike King Rage Craws.  When fishing this offshore pattern, Shook says spotted bass strike first.

“Coosa spots are the most aggressive fish on the lake, so expect the first strikes to come from them. As you continue to fish the same area, the largemouth will bite.”

Shook recommends anglers use their side scan sonar to search the river and creek channels from Little River Marina to Cowan and Spring creeks. He says this pattern is effective from May through August.

Of the five boating access points on Weiss, the Leesburg ramp is the only one with bathroom facilities. The Cedar Bluff ramp on the causeway is the largest with 71 trailer spaces. Satellite images and directions to the ramps are available at www.outdooralabama.com.

With more than a dozen campgrounds to choose from on Weiss, anglers can camp near the area of the lake where they wish to fish. A map search on the internet will quickly reveal their locations.