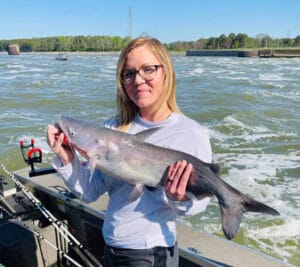 Instead of fishing for trophy blue catfish this month, veteran guide Mike Mitchell targets channel catfish below the Wilson Dam.

Winning catfish tournament angler Mike Mitchell, who also guides for trophy blue catfish on the Tennessee River, reports poor fishing for the big bruisers during June, but he points out this month is a great time for catching channel catfish for the table.

“Since blues spawn on the Tennessee River in June,” Mitchell explained, “it is my least favorite month for catching big fish. Feeding is not a priority for spawning fish. Furthermore, it’s difficult to get bait to blues spawning under heavy cover.

“Instead of fishing for big blues in June, you can catch 100 channel catfish weighing 2 to 10 pounds, with an occasional 20 pounder. It’s tremendous fun catching these fish on light tackle.”

Even though Mitchell’s drive takes 2 hours, his favorite place to fish during June is the Wilson Dam tailrace. It’s not surprising since he landed an 87 pounder there on the same light tackle he uses for channel catfish.

Mitchell’s tackle consist of a light spinning rod spooled with 14-pound-test monofilament, a swivel, and a 3-foot leader of 30-pound fluorocarbon tied to a Team Catfish 6/0 circle hook. When he uses a sinker, they weigh up to 3 ounces.

For bait, the guide cuts fillets of skipjack herring into 3-inch pieces.

“Most of the time,” he explained, “I do not fish in the current below the dam so it’s just the hook and bait. Even without a sinker, the skipjack sinks quickly in calm water. When fishing in the current, use enough weight to get the bait to the bottom.”

Mitchell targets fish in the expansive area, which varies in depth between 2 and 20 feet, between the turbines and the lock.

“It’s tricky getting in there,” he said, “but it’s where they discharge the lock. When they do, water rises 7 or 8 feet, so you must leave when they sound the horn. Catfish are conditioned to feed during the discharge, because it kills baitfish.

“After 10 or 15 minutes, it’s safe to return, and fishing is excellent for about 30 minutes. Then, the bite returns to normal until they lock another barge through.”

Mitchell allows his boat to drift in the current created by the discharge and uses a heavy sinker to keep his bait near the bottom.

When not fishing adjacent to the lock, Mitchell slowly maneuvers his boat with the trolling motor, casting fresh-cut bait without a sinker.

“It more like crappie fishing,” he explained, “only slower. Let the bait sink to the bottom, move it a little and let it sink again. Often, catfish will take the bait as soon as it hits the water. When the shad are thick, you can see catfish attacking bait near the surface. I have pitched my bait in front of fish and caught them.”

When moving and casting for cats, Mitchell fishes two rods from rod holders off the back of the boat that are rigged with corks about 6 feet above the hooks. He selects bigger baits for these rods, and they usually produce the biggest fish.