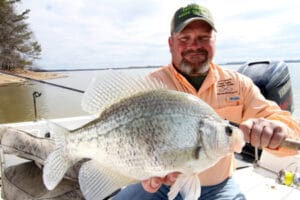 Hot tips from a top Weiss Lake guide for catching crappie in November.

“In November when water temperatures fall to about 75 degrees,” said guide Pat Trammell, “anglers catch bigger fish and the numbers are outstanding. It is one of our best months to fish on Weiss Lake, as crappie hold tight to schools of baitfish on creek channels and creek mouths around Little River.”

Trammell relies on side scan sonar to find baitfish and searches the creeks at 5 mph. He says you will usually find crappie 8 to 10 feet deep and holding on top of big balls of baitfish. If you can see crappie on sonar, Trammell is certain they will bite.

The guide continued, “Long-line trolling is the most effective technique in November. Cast 1/16-ounce jigs about 30 yards and troll at 0.8 mph. One jig will descend to a depth of 5½ feet. If you need to fish deeper, use two jigs in tandem. Troll directly over the baitfish. I troll with 6-pound line and use a loop knot for the jig. Depending on water clarity, I troll curly-tail Southern Pro jigs in either Junebug or a blueish green color.

When trolling, Trammell watches his sonar for schools of bait outside the coverage of his spread. “You can make a long pull while watching the side scan, then move your track 15 feet to pass over them, and you will catch fish.”