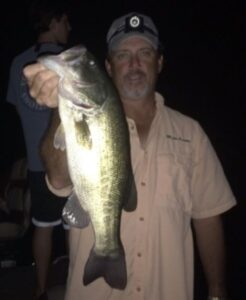 “Weiss has a really phenomenal spotted bass fishery,” said Mike Holley, District II fisheries supervisor. “Weiss has always been known as a crappie lake, so it doesn’t get much attention as a bass lake. When we do our population matrix, we tend to see bigger spots or spots as big as anywhere on the Coosa. We see a lot of spotted bass in the 17- to 20-inch range. They are as abundant as, or more abundant than a lot of other Coosa River reservoirs.”

Located in northeast Alabama with an arm reaching into Georgia, Weiss Lake covers 30,200 acres of drop-offs, deep channels and stump fields on large shallow flats. It also has wide coves with grassy shorelines and numerous boat docks. Unique to the fertile reservoirs of the Coosa River, Weiss only has an average depth of 10 feet. Nutrients flowing from the watersheds of the Coosa, Chattooga and Little rivers enrich the fishery.

Veteran guide and successful tournament angler Mike Carter’s success on the water confirms Holley’s findings with catches of up to 50 spotted bass on a good night of fishing.

“Night fishing produces high numbers of spots,” Carter said. “We occasionally catch a 6 pounder, but most of the fish weigh 2 to 3 pounds with a mix of 4 pounders. I have fished Weiss since the 90s, and my night pattern has not changed.”

Carter’s summer pattern involves slow rolling spinnerbaits on long tapering points that eventually drop into water 15 to 30 feet deep. A productive point has rocks and stumps. “Look for either one,” Carter advised, but if you can find a point where the rocks and stumps are mixed together, that point will hold good fish.”

He only fishes offshore and catches the majority of his fish at depths of 5 to 8 feet. Depending on the conditions, however, Carter says anglers can catch fish as shallow as 2 feet or as deep as 10 feet.

“When Alabama Power is generating electricity,” he said, “the fish are more active. If they are generating and it’s a calm night, the fish move out a little deeper into the 8- to 10-foot range.

“Another condition that drives the spotted bass deeper on the point is a full moon. I don’t like full moon nights. The fish are spookier and are usually in a daytime pattern. I catch more fish if there is not a full moon.”

Carter’s go-to lure for this winning pattern is ¾-ounce, long-arm spinnerbait with #7 Colorado blade. He rigs the spinnerbait with a #11 Uncle Josh pork frog, and his favorite color combination is purple and red.

The Uncle Josh Bait Company stopped producing pork rind nearly five years ago due to a lack of quality fatback needed to produce durable pork baits. Pigs are now brought to slaughter much earlier than before, so the skin and fatback are too thin for making baits. Uncle Josh pork frogs are available for purchase on www.ebay.com.

“A spotted bass will destroy a plastic trailer,” Carter said. “If you use a plastic keeper on your spinnerbait, you can use the pork frog all night.”

Top places to fish Carter’s night pattern on Weiss include Little River, Cedar, Big Nose and Yellow creeks. “You can make an entire night out of just fishing Little River,” he said. It’s a great place for a night trip and you never have to leave the area.”