Summer Bassin on the Tombigbee River 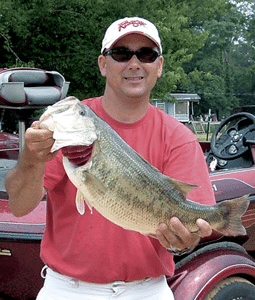 Aliceville, Gainesville and Demopolis lakes on the Tombigbee River drainage provide plenty of fishing water. Here’s what the bass action is like in July on these reservoirs.

Summer patterns for bass on the lakes of the Tombigbee River are as predictable as the weather in July. The methods and techniques for finding and catching bass this month rely on the tremendous numbers of baitfish found throughout the lakes.

As a result, most bass easily satisfy their hunger by waiting for prey to pass within their target zone, while others — often smaller fish of similar size — form schools to follow shad in open water. Both feed heavily, but the former use less energy.

The mystery lies not in summer patterns but in being in the right place at the right time. The abundance of forage reduces competition for food, so discriminating bass become more difficult to catch. Get it right, though, and the action is as hot as fishing in a hatchery pond.

The best times are the first few hours of daylight and the last two hours in the evening.

Between Aliceville and Demopolis lakes on the Tennessee-Tombigbee Waterway, Gainesville Lake stretches for nearly 47 miles from dam to dam. Its 6,400 acres lie north of Interstate 59 and west of Tuscaloosa. In addition to the Tombigbee, Gainesville is fed by seven creeks and the Sipsey River.

Gainesville is a river-run lake with limited backwater areas and 200 miles of shoreline. To straighten the winding waterway for barge traffic, the U.S. Army Corps of Engineers dredged eight cutoffs, which added a few miles of shoreline, and enhanced the habitat in the remaining horseshoe bends.

“If I had to choose a favorite,” Schoenrock said, “it would be Gainesville.” He credits the lake’s superior fishing to a lack of pressure from anglers, especially tournament fishermen.

The summer pattern Schoenrock used to generate those high numbers of bass works not only at Gainesville but also at any river-run lake with an inundated river channel. “Look for an old river ledge with stumps or an area where erosion has created a hump in 6 to 8 feet of water,” he offered. “The best places are a combination of humps with stumps. Often, water has removed the dirt below the stumps, but the roots are still holding in the firm bottom. If you could see underwater, it looks like a hotel for fish.”

As long as this structure or cover is close to deep water, Schoenrock said, it doesn’t matter whether it’s in a bend of the river or on a straight run. Nor does current matter for the pattern to work. “You can find these places with a depthfinder,” he explained, “but often I find them by keeping my eyes open. I’ve found many good fishing holes by watching for fish busting the surface.”

According to Schoenrock, you find humps along the edge of the river channel covered with hydrilla or milfoil. These hold fish — but it’s better if the humps can’t be seen to passing anglers. “Avoid visible cover,” he cautioned. “By July, fish in visible cover have seen just about every bait imaginable. It’s hard to do, but try to find places not fished by every passing angler.”

Schoenrock’s lures for fishing humps include DT-6 and DT-10 crankbaits by Rapala and 10-inch worms rigged Carolina- or Texas-style. All are fished on 12-pound-test monofilament. The Carolina rig has a 4-foot leader with a 1/2-ounce sinker, while the Texas rig has a 1/4-ounce pegged sinker.

“To trigger strikes, try to run the crankbait into the stumps,” said Schoenrock. “And if the fish are suspended, the long leader on the Carolina rig often triggers a bite.”

Upstream from Gainesville, Aliceville Lake is the first reservoir in Alabama on the Tombigbee River as it enters the state. For the 15 miles from the Stennis Lock and Dam in Columbus, Miss., to Hairston Bend Cut-Off, the 8,300-acre lake is riverine. At that point, the reservoir rises beyond the riverbanks to create expansive grass flats with an abundance of wood cover. It then meanders another 13 miles before reaching the lock and dam at Pickensville. The lake’s shoreline totals 148 miles.

This month, Shan Schoenrock’s primary Aliceville pattern is exactly the same as the one he goes with at Gainesville. But early in the morning, he may fish a topwater lure. The early-morning bite is often critical to winning a summer tournament, he said. “By July, most of the aggressive fish are chasing shad around the river to places where they can surround them to feed,” the angler explained.

With large balls of shad roving the lake, it’s not at all surprising that bass follow bait, but Aliceville’s big bass hold on structure rather than forage in open water. Accordingly, Schoenrock heads to underwater humps to work a topwater lure in the stillness of first light.

“Always keep a topwater lure and a crankbait ready,” he recommended. “If small fish are feeding on the surface, often bigger fish hold around them. Fan-cast with a crankbait to catch those bigger fish.”

Schoenrock’s topwater lure is a walk-the-dog bait, a Sammy by Luck Craft in sizes 100 or 115 that he fishes on 12-pound-test mono.

Creek mouths are another key structure for early-morning topwater fishing. Fish often feed on the surface above dropoffs created by the creek flowing into the river. Schoenrock usually positions his boat over the river channel and makes long casts toward the creek.

To fish Alabama’s section of Aliceville Lake, launch your boat at the Raleigh Ryan Access Area on the west side of the river across from Pickensville.

Downriver from Gainesville, the Corps created Demopolis Lake by damming the Tombigbee River a couple of miles west of the city of Demopolis and just below the confluence of the Tombigbee and Black Warrior rivers. The lake extends 53 miles upstream on the former and 48 miles on the latter. Nearly all of these miles are riverine.

As the largest reservoir in the Tombigbee-Black Warrior drainage, Demopolis covers 10,000 acres and offers 500 miles of shoreline. Amazingly, this run-of-the-river lake provides exceptional habitat. Demopolis has more creeks per river mile, more backwaters — and it has plenty of laydowns and weeds. The weeds along the shoreline are abundant, but nowhere near a nuisance level that discourages fishing. It has water-willow, water primrose and cutgrass — weeds that start at the edge of the water and grow out.

According to Schoenrock, the primary pattern in July involves hitting the stumps and humps on the river ledges with crankbaits. However, the abundant weeds growing along the shoreline offer anglers a morning bite. “Flipping the thick grass mats growing out from shore is effective for big bass,” he advised, “but anglers must be realistic when fishing in July. You aren’t going to catch a limit; it’s not for numbers of fish. You’re looking for a few good bites.

“Any grass in 4 to 6 feet of water is worth fishing. Often it grows on bends and over flats in the creeks off the river.”

The 16 public access areas guarantee that worthy fishing spots are never far from a boat ramp. The City Landing in Demopolis is a great place for launching into fish the lower lake.