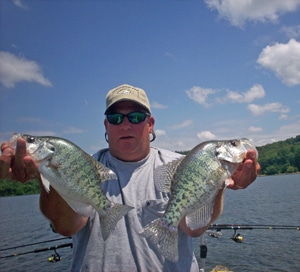 As our last lake on the Tennessee River, Pickwick Lake flows northwest for most of its 49-mile length. About a quarter of the lake’s lower waters belong to Mississippi and Tennessee. However, anglers find the best crappie fishing in Alabama on Bear, Shoal and Second creeks.

Dodd’s favorite area to fish is Bear Creek, which lies partly in Mississippi.

Pickwick always produce good numbers of crappie, especially in the Bear Creek embankment. In their creel surveys, biologists get some of their highest catch rates from that area.

According to Dodd, Pickwick’s crappies don’t turn on until the water warms to 58 degrees. Last year, he said that occurred in March.

“When the water temperature reaches 58 degrees,” Dodd explained, “it’s time to start long-line trolling in the creek channel at depths of 12 to 14 feet. The channel is like a highway for crappie migrating to the spawning flats.”

As the water continues to warm in April, the fish move up in the water column until they spawn.

“Usually,” Dodd said, “crappie start spawning when the water reaches 68 degrees and peaks at 72 degrees. And then as water temperatures warm into the upper 60s, the fish cannot decide whether to hold over deep water or move onto the flats.”

“Typically, start trolling in the middle of the channel early, then move to a ledge, and finally work the flats. Spring is sometimes difficult because of cold fronts. You may catch crappie in 8 to 10 feet of water one day, and then after a front, find they have moved back into deeper water.”

In April as the water warms into mid-morning, Dodd checks to see if the crappie have moved onto the flats and increases speed to adjust the lures depth for shallower water. If the flats do not produce, he returns to the creek channel.

Dodd long-line trolls with six B’n’M rods on the bow and another six on the stern. To provide spacing for his jigs, which are trolled 35 feet behind the boat, Dodd’s rods vary in length from 10 to 14 feet. Each line has either a single 1/16-ounce jig or tandem 1/32-ounce jigs.

He begins by trolling the lures 30 to 40 feet behind the boat and watches his GPS to maintain a speed of 0.4 mph. The combination of speed, line length and lure weight allow the baits to travel 12 to 14 feet deep. Dodd varies boat speed to control lure depth.

“Anglers can usually locate fish within an hour and begin to form a pattern,” Dodd instructed. “That’s the reason for starting deep and then moving shallow. You are establishing a pattern. Once you find the pattern, you can catch a lot of fish.”

To become a member of the Shoals Area Crappie Association, telephone Dodd at (256) 679-1826. In addition to Pickwick, the association holds tournaments on Wilson, Wheeler, Cedar, and all Bear Creek Development Authority lakes.