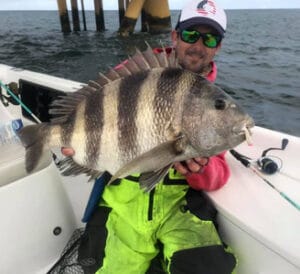 Record sheepshead holder and guide Patric Garmeson’s tips and techniques for catching these notorious nibblers on Mobile Bay this spring.

“March and April are breakout months for sheepshead,” said inshore/nearshore guide Patric Garmeson. “Even if I don’t book a charter,” said Garmeson (www.uglyfishing.com), “I am looking for a reason to go sheepshead fishing in March.”

“Some years,” he explained, “fishing for sheepshead peaks in March, other years it peaks in April. When water temperatures warm between 65 and 70 degrees, big fish begin to appear on the rigs. The sheepshead we catch range from 3 to 4 pounds up to 7 to 10 pounds.”

Garmeson targets this delicious fish in Mobile Bay and up to 3 miles into the Gulf on reefs and rigs. He caught the record while fishing at a gas rig.

The guide recommends searching around the rig for sheepshead before choosing where to fish. While he does use down and side imaging sonar to locate fish, he prefers spotting fish near the surface.

“If you drive by the rig,” Garmeson said, “and see three or four fish flash on a single pole, then you have a very large school in that area. But if you are fishing in Mobile Bay, you will not be able to see the fish due to poor water visibility. ”

Finding sheepshead is not difficult, but catching them can be problem. They have little mouths with buckteeth perfect for eating barnacles. In the world of saltwater, no species beats sheepshead at stealing bait.

To catch these hard fighting fish, the guide uses a 7-foot spinning rod filled with 20-pound braid, which he ties to a 20-pound fluorocarbon leader. He completes the rig with a split-shot above a No. 6 Kahle hook and live shrimp.

Garmeson continued, “Use a split shot heavy enough to sink the bait at a slow controlled rate. If it descends slowly, the fish will have more time to take the bait.

“Watch the line, and when it stops moving, set the hook. I think the majority of the sheepshead are near the surface.”

With this setup, Garmeson and his clients also catch pompano, red snapper, and Spanish mackerel. He said anglers can eliminate much of the bi-catch by using fiddler crabs for bait.

However, when the guide caught the 13-pound, 14 ounce record sheepshead, he was not using live bait.

“My client had just broken off,” Garmeson explained, “so I gave him my rod. I took his and decided to fish with an artificial lure, so I tied on a 1/4-ounce, pink Bomber jig head rigged with a 3-inch, white Gulp shrimp. I caught the fish on my first cast.”