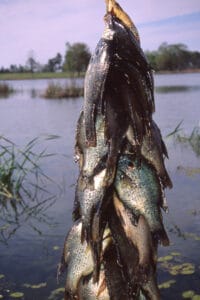 The myriad lakes, creeks and bayous of the Mobile Delta are home to plenty of bream. Here’s a year-round look at the fishing the region offers for these tasty battlers.

When you set the hook on a full-grown bluegill, the line immediately stretches tight and sings as it slices diagonally through the water. On the other end of the line, the big bull bream instinctively turns its broad, flat body at a right angle to resist pressure from above. This visceral reflex by the bream gives anglers a fight certain to bring smiles to the faces of children and adults alike.

Anglers across Alabama catch enormous numbers of panfish throughout the year, and this is especially true in the Mobile Delta. The fishing is so good there that the region is considered a bream destination.

Covering more than 20,000 acres of water, the Delta’s small rivers, huge coves, creeks, lakes, bays and swamps form ideal shallow-water habitat to support great numbers of bream. The 12-mile-wide Delta stretches for 30 miles from Mobile Bay up the Mobile, Tensaw, Alabama and Tombigbee rivers. Tides influence fishing along the way, so the waters of the Delta vary from fresh to salt.

There are also two Delta angling habitats, which are separated by Interstate Highway 65. The Lower Delta has slow-moving rivers and streams with large shallow bays; above the interstate, the Upper Delta’s many small streams flow through wooded areas with blown-down trees and cypresses with their associated knees. The Upper Delta is also less affected by salinity.

District fisheries biologists for the Division of Wildlife and Freshwater Fisheries, attributes the Delta’s excellent bream fishery to a combination of fertile water flowing from a watershed covering 44,000 square miles, the area’s nutrient-rich soil, the unique habitats available, and a smorgasbord of forage.

They typically sample bream in the spring and/or fall to track abundance, growth rates, relative size and health of the fish. Over the years the biologists have collected a lot of data on bream.

Their data show that the Delta’s panfish species prefer different habitats. Bluegills, warmouth (“goggle-eyes”) and redspotted sunfish (“stumpknockers”) do well in the more timbered and somewhat more upland environment above I-65, while redears (“shellcrackers”) dominate the Lower Delta. On the lower end, the emergent and submergent vegetation growing in rich soil supports a strong snail population. Redear do not necessarily focus on snails, but they do have the ability to eat snails because of the strong bony plates in their jaw, so they can focus on a lot of foods that bluegill, goggle-eye or spotted sunfish can’t eat. That probably explains the greater abundance of redear as compared to bluegill in the Lower Delta.

As for the Upper Delta, the bluegill is the lead species. Goggle-eyes and stumpknockers are much less abundant than bluegill and redear, but it also varies depending on habitat. In some places, anglers will catch more warmouth or stumpknockers.

Goggle-eye habitat has little feeder creeks with a mix of submergent weeds and plenty of brushpiles or logs, while stumpknockers prefer a habitat that’s heavily timbered.

Of course, this relates to how they feed. Warmouth feed on small to medium crawfish, minnows and even baby bream. In contrast, stumpknockers feed primarily on insect midges that colonize on wood and plant fibers — hence the species’ nickname.

From their samples biologists concluded that anglers can expect to catch keeper bluegills measuring 6 to 10 inches, shellcrackers 8 to 11, goggle-eyes 6 to 8 and stumpknockers about 5 inches.

Inch for inch, shellcrackers and goggle-eyes yield the heaviest fillets. Much like the goggle-eye and unlike the bluegill, the shellcracker tends to feed on much bigger insects dwelling more on the bottom.

Successful bream tournament angler Roger Booth of Robertsdale, said in the habitats he fishes, goggle-eyes make up about 10 percent of his catch, and stumpknockers 3 to 4 percent. He noted that the ratio of shellcrackers to bluegills depends on the season, since, having spawned, redears are difficult to catch until the first cold front in autumn.

During April and May, Booth advised, the best place to fish is a creek mouth where the water joins the river to create an eddy. Targeting such places is how he wins tournaments.

“The best place to fish on any body of water,” Booth said, “is where a creek flows into the river. It’s productive because both the creek and the river deliver food to the fish, and there’s a dropoff leading to deeper water. The creek mouth is also a staging area for pre-spawn and post-spawn fish.” The resulting eddy brings in and holds the food in place for bream positioned on its outer edge.

“All creeks, regardless of size, produce fish, but bigger is better,” Booth explained. “The current flowing from a large creek delivers more food and creates a large swirling eddy. Since it’s bigger, it will attract and hold a lot more bream.”

To fish a creek mouth, Booth positions his boat in line with the downstream corner of the creek on the deep side of the eddy. If unsuccessful, he repositions to the upriver corner of the creek. If that doesn’t work, he moves back to the lower corner, but positions the boat on the shallow side of the eddy. And lastly, he moves upriver to the remaining corner. This search pattern eliminates possible holding areas without spooking the bream.

Booth approaches each spot quietly, points the bow into the current and then slowly lowers anchors to the bottom off both ends of the boat. When fishing with a partner, he has each fishing opposite sides of the boat to increase the search area. Using 12-foot poles with the reach they provide, Booth and his partner’s search area is quite large. They fish for 30 minutes before moving.

“Have enough rods so you don’t get bored fishing,” recommended Booth. “I start fishing with three rods and check my bait every five minutes. If you get a bite every 10 minutes per rod, the fish keep you busy. If the fishing picks up, you may have to drop down to one pole.”

Booth rigs his poles with 8-pound-test monofilament, a slip cork, two BB split shot and a No. 6 hook.

“It’s common to catch catfish weighing up to 12 pounds,” he said, “so 8-pound test keeps them from breaking your line. Also, a wire hook is a good combination with the heavier line; it will straighten if you get hung.

“If you are fishing in 5 feet of water, place the sinkers 20 inches above the hook and adjust the slip cork so the sinker rests on the bottom. When the sinker reaches the bottom, the slack in the line will now allow the worm to slowly descend. Remember: If there’s a slight current, it may move the bait left, right, or up and down. The bait is covering a much larger area, which is very important to your success.

“The fish sees a piece of food wiggling and drifting in the current, and the sinker is so far away he doesn’t feel anything when he takes the bait. The cork is there to let you know when he moves off with the bait. When he moves the sinker, then the cork moves, and you know you’ve got him.”

Booth’s terminal rig works for all four species of panfish, including shellcrackers. In fact, regardless of the season, it’s the only rig he uses for bait-fishing. Worms are his primary bait, but he always leaves the dock with 100 crickets.

“In late April and early May,” Booth said, “expect to find fish 5 to 6 feet deep around the eddies. As the water warms, gradually move to shallower water.

Once you’ve found fish, noted Booth, the pattern holds throughout the Delta. Not that you’ll have time to check many spots: “By the time you fish the second one,” he explained, “you should have a limit.”

If the fish aren’t biting, Booth tries to arouse their desire to feed by chumming. “Bream have a great sense of smell,” he offered. “Use this to your advantage by removing an inch of dirt off the top of your worm can and throw it upcurrent, so it drifts over your fishing area. Repeat after 45 minutes. In a sense, you are chumming with the dirt.”

Even though anglers can find shellcrackers spawning in late April, Booth sticks with the creek mouths because of the number of staging fish. As it warms, the fish move in waves toward the shallows.

When his catch rate falls, Booth abandons the job of gatekeeper and repositions to the shallows. He doesn’t travel far, as the beds may start only yards into the creek.

“In June,” he exclaimed, “you can’t hide a worm! If you want to eat a sandwich, you’ll have to put your poles in the boat. It’s a great month to take your friends, because you are more likely to find fish.”

Popping noises on the surface often alert Booth to the presence of bedding fish. “You’ll hear them sucking insects down,” he said. “Fish places where there’s more than one fish feeding.”

Booth also uses a fly rod and a white popping bug to search for bedding fish. “Work the edges of the creeks using a popper in the early morning,” he advised. “If you can catch three fish in one place, carefully back away. When you have your poles ready to fish, ease into position to anchor.

“The biggest mistake anglers make when fishing beds is dropping their anchor and not letting it slide slowly to the bottom. Banging it on the side or bottom of the boat will spook the fish.

“Bedding bluegill are available in June, July and the beginning of August. Then, it’s necessary to move back to the creek mouths. Fish early or late and stay in the shade.”

During September and early October, Booth pointed out that the fish move deeper into the river, and anglers find that the fish have returned to the outside edges of eddies in water 5 to 6 feet deep.

As the water begins to cool sometime in October, fishing picks up again in the creeks. “Go back in the creeks about 40 to 50 feet,” Booth emphasized. “Don’t go far, because the fish are skittish. You find fish feeding on the edges where insects are falling into the water. As fall progresses, leaves begin to accumulate on the surface. Any debris on the edges provides a feeling of security to the fish, and they bite as soon as your bait enters the water.

“Depending on the weather and the amount of debris, fishing in the creeks may continue until January.”

“When the water is low in summer,” Booth advised, “look for clamshells on the bank; it will look like a shell driveway. Remember those spots and return to them in winter. With a higher water level, start searching for shellcracker 30 to 45 feet off the bank.”

Booth’s second pattern produces shellcrackers from December to March. “If you can find lily pads with shells attached to the stems,” he said, “rake the pads with your paddle to shake the shells off the pads. Either the smell of the bruised vegetation or the broken shells attract shellcracker. Back off about 20 feet, anchor and get ready to catch fish.”

“Fish the mouth of the Hot Ditch,” Booth said, “and you can catch a variety of species in December, January and February.”

Regardless of the season, Booth said, bream become active feeders when the tide is moving.

Like other fish in the Delta, bream swim in an environment where they are triggered to feed by moving water. To take advantage of this feeding response, plan to fish the first two hours of an incoming or outgoing tide.

Access above I-65 is available at Upper Bryant Landing on Baldwin County Road 21 north of Stockton.

Access below I-65 is available at Perkins’ Hurricane Landing near Bay Minette off State Route 225. Perkins’ is a good choice for fishing McReynolds Lake. Both landings offer camping.