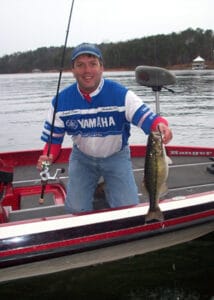 Strategies for catching largemouth and spots on Lake Jordan in June.

Alabama Bass Trail competitors Brent Crow and his partner Rex Chambers consistently finish in the money when the tournament series visits Lake Jordan. A few years ago in the month of June, they finished second with 18.01 pounds, just .36 out of first place. Their big fish weighed 4.62 pounds.

Crow, who guides on north Alabama lakes said they fished two productive patterns for the June tournament on Jordan. The patterns are effective on offshore points on the lower section of the lake and on visible points and pockets on the upper riverine section.

“On the first practice day,” said Crow, “we had planned to arrive early and fish shoreline grass. Instead, we arrived mid-morning to find gin-clear water. The grass failed to produce a strike the first 30 minutes, so my partner started fishing a shaky head jig in water 18 to 20 feet deep as I continued to work the grass. We moved over a little point and he caught a 4-pound largemouth. At next little point, he caught a 3 3/4-pound largemouth.”

Some anglers might have considered the two fish a fluke, but not Crow and Chambers.

“When that happen,” Crow said, “I put all the rods I had rigged for fishing shallow in the rod locker and pulled out my offshore stuff. We decided that since a fish came from two points, we should search the map for similar points to see if we could develop a workable pattern. The next nearest point produced a 3 pounder. We caught 3 to 4 pound bass on the first six points that we fished. We did not fish the grass again.”

Covering 6,700 acres, Jordan has 188 miles of shoreline, which includes flooded backwater creeks on the lower section from the dam upstream to Blackwell Slough. The remainder of the lake upstream to the Mitchell Dam is riverine. It has two dams. The second dam, known as the Walter Bouldin Dam is unique and creates a large pool with an excellent population of bass at the end of the canal leading to the dam.

The team’s late arrival had them quickly abandon their strategy to fish grass and adapt a more reliable offshore pattern. Crow said the sun had driven the bass he had expected to catch shallow to the nearest deepwater points.

“The remainder of the practice day on Thursday and all day on Friday,” said Crow, “we looked for the same type of places. We got bit on the majority of them. Then on Saturday, we went back and fished them. We had an awesome three days, and we had these places to ourselves.”

Crow says they fished points in every creek on the lower section of the lake. Main lake points produced spotted bass, while obscure secondary points held largemouth. They caught fish at depths between 12 and 20 feet deep, but the key was having some type of cover on the point.

Crow continued, “You had to have either brush or rocks, which is not a problem on Jordan. A smooth, flat point would not hold fish. If you could drag your lure over the point and hit the cover, then that is where the fish would strike. Occasionally, one point would produce as many as three fish.”

To trigger strikes from offshore bass, Crow used either a ¾-ounce football jig rigged with a green-pumpkin Strike King Rage Craw or a Strike King Bull Worm on a ¾-ounce shaky head.

“With the lack of current,” he explained, “the fish were not active. We did not hop the lures. When the lure hit cover, we would sometimes give it a little shake.”

Surprisingly, on tournament day, the team decided to start by fishing jerk baits and topwater lures for spotted bass on the riverrun section of the lake.  “We knew the offshore fish would bite anytime during the day,” said Crow, “so we decided to catch some bonus fish by going up the river to fish points and pockets.”

The lake is clear enough that it is perfect for fishing topwater.  Crow’s go-to topwater lure is a cigar-shaped walk the dog lure. The lure’s quick action and sudden changes trigger reaction strikes from great distances in clear water. It allows the guide to cover water quickly.

“Our decision paid off, and almost immediately we had a double, and it was a pair of 3 pounders. I love topwater fishing for Coosa spots.”  Spotted bass prefer the swift water along Jordan’s steep banks. They will use the current breaks formed by the small points and pockets to wait for shad to pass in the swirling water.

“There are probably a hundred places to fish going up the river,” said Crow, “and you never know when you will hook a big fish.”

To book a guide trip with Brent Crow visit his website.

For current fishing information and tackle, visit Stoddard Bait and Tackle (334) 478-3899 on Company Street next to Coosa River Adventures, which is below the dam in Wetumpka.

The DCNR maintains a boat ramp on the east and west banks of Lake Jordan. Both are excellent. The ramp nearest Wetumpka is on the lower lake at the end of Boat Ramp Road, and the west ramp lies at the end of Bonners Point Road, off Holtville Road.