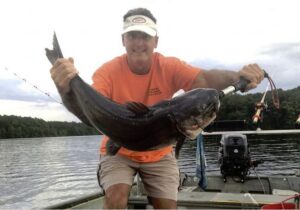 A fall camping trip to Lake Frank Jackson in Opp is a fishing treat.

On Lake Frank Jackson, October marks the beginning of the transition from summer to fall fishing. Cooling water temperatures and shorter days trigger a change in the feeding behavior of the lake’s fish that continues until winter.

Located within the city limits of Opp and covering 1,037 acres, Frank Jackson is the largest lake operated by the state. Its most notable feature is the greatly different habitats divided by Highway 331. From the highway to the lake’s headwaters, there is a maze of stumps and fallen timber. West of the road, the only visible cover on the main lake is aquatic vegetation, and the only structure is the submerged Lightwood Knot Creek channel.

“Lake Frank Jackson is a local treasure not widely known outside the area,” said Ken Weathers, District IV supervisor. “It is popular with anglers from Andalusia to Enterprise and with anglers who camp at the park to fish for bream and crappie.”

The lake offers above average fishing for largemouth bass and good fishing for crappie, bluegill, shellcracker and catfish. Despite having a relatively infertile watershed, Frank Jackson’s fishery does surprisingly well.

Weathers explained, “The lake is productive. Frank Jackson covers more than 1,000 acres, but probably more than 400 acres is only 2 to 3 feet deep. Above Highway 331, the lake is shallow and much of it is not fishable, but it’s a good nursery that sustains the fishery.

“Growth rates for crappie are as good as or better than the fish on Lake Eufaula. Of course, there is not near as many of them.”

Beginning in October and continuing into spring, crappie anglers troll or drift minnows and jigs along the creek channel. Two areas known to produce big fish are near the dam and the 13-acre island.

Also, schools of keeper-size crappie frequently wait to ambush baitfish near the Highway 331 Bridge pylons located on either side of the creek channel.

Look for quality fish in heavy cover on the upper end of the lake along the creek channel. The flats next to the channel are 4 to 6 feet deep.

The most effective lure is a ½-ounce jig with your favorite trailer in crawfish colors fished on 50-pound-test braid. Flip or pitch the jig for a quiet presentation.

The habitat on the upper lake is also home to some of the largest channel catfish on the lake. Catfish up to 10 pounds lay under the timber on the submerged banks of the channel.

To wrangle old whiskers from the carpet of logjams, a heavy action rod and a reel spooled with braid is essential. Rig a short wire or fluorocarbon leader to the braid and attach a float to keep the bait off the bottom.

When the fish are active, Frank Jackson’s catfish will bite nearly any type of bait, but when the fishing slows, nothing beats shrimp.

Frank Jackson State Park is a popular camping destination and has 32 RV sites with cable and wi-fi service. To reach the entrance to the park, turn west off of Main Street in Opp onto Jeffcoat Avenue and then continue on Opine Road for less than a mile.