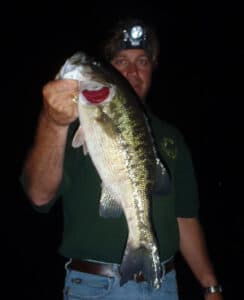 From late June to early October, crankbaits and jigs work wonders on the Alabama River.

“Summer is the longest season we have in Alabama,” explained Damon Abernethy, Assistant Chief of Fisheries with the Alabama Department of Conservation and Natural Resources. “If you find a workable pattern in late June or July, you have two or three months to perfect that pattern. Whereas in spring and fall, conditions are constantly changing.

“Ordinarily,” he continued, “the first cool down doesn’t occur until October, and even then, it may not affect water temperature much. Water temperatures are still at their highs in September, and summer patterns are consistent throughout the month.”

With the predictability and stability of late summer, you might think bass are easy to find and catch. In some situations they are, but fishing may become difficult in most reservoirs.

“With water temperature reaching or even exceeding 90 degrees in some cases,” Abernethy noted, “bass actively feed, but they are also more lethargic than anglers might think. Their activity level is highest when water temperature is in the mid-70s. As the water warms, they become less active.

“That doesn’t mean bass will not aggressively feed on a school of shad for a little while. Throughout the day, though, they expend less energy than they would if the water was 15 degrees cooler.”

Additionally, an abundance of forage may turn bass into picky feeders as they target specific species at different times. Shad are always an important factor in forming a pattern, but anglers looking for quality bass should also consider bream.

“Almost without exception the primary forage in all Alabama lakes is shad,” Abernethy said. Once bass reach about 3 pounds, they expend as much energy as they gain chasing small shad. So they usually need larger prey to grow past that size, and that’s when they start feeding on bream. Of course, bass will eat anything they can get into their mouths.”

Depending on the reservoir, locations for successful late summer patterns may include the backs of creeks, blowdowns, river ledges and weedbeds. And most patterns are specific to catching either largemouth or spotted bass. However, it’s the persistent application of summer tactics that produce winning patterns.

“From late June to early October, Jones Bluff is one of the best lakes to fish within an hour’s drive of Montgomery,” Abernethy offered. “Anglers can experience some good days there in summer.”

He warned stringer weights on Jones Bluff decline in summer just as they do on every lake when the water is hot, nevertheless, anglers need a 3-pound average to win most tournaments.  He says under the right conditions anglers could catch as many as 15 spots in 30 minutes.

“It’s amazing how many fish move onto a specific area on a river ledge to feed when there is a current,” Abernethy said. “You may find them on a ledge at 14 feet or as shallow as 2 to 4 feet. Given water temperatures, it often surprises me that they stack up on a very shallow ledge. You can catch a limit of fish from river ledges in September.”

Nothing better could describe why Abernethy targets spotted bass on river ledges in Jones Bluff.

His favorite pattern is to work a jig across fish-holding structure on the edge of a submerged river channel when there is a current, which is essential for fast action. Depth is usually determined by the position of shad in the water column.

To find structure, Abernethy may idle up and down a ledge for a couple of hours while watching his sonar for irregular features. He’s not looking for individual fish, but does take note of the depth of baitfish as bass are often found at the same depth. Having narrowed his fishing area with sonar, Abernethy uses a diving crankbait to refine his search. He may work the ledge for a couple of miles.

“The lake below Swift creek,” Abernethy noted, “which is where I like to fish, is below the fall line so finding rock is not easy. Rock usually attracts fish.

“You can cover a stretch of ledge quickly using a crankbait. Often, you feel it dig the bottom and then hit a hard surface or a brush pile. That’s a place to fish when there is a current. Enter a waypoint then and every place you catch a fish. Then return to work it thoroughly with different baits to learn what is on the bottom. Most of the time it’s rock.”

During a tournament, Abernethy’s strategy is to have at least a half- dozen of these hotspots ready to fish as soon as the generators start spinning.

“On Jones Bluff and similar lakes where there is a current every day,” he advised, “fish are conditioned to feed when there is current. There is no reason for them to feed any other time. Spotted bass fishing is strongly related to current.”

With water flowing and fish feeding, Abernethy begins fishing those waypoints with a black and blue, ¾-ounce football-head jig on 15-pound-test fluorocarbon. A heavy jig is required to maintain contact with the bottom and a feel for the lure. Any lighter and the current forms a bow in the line. If that happens, all sensitivity is lost.

“When the current is on and fish have their noses down,” Abernethy said, “you catch more fish using a jig or any lure on the bottom.”

Through scientific tracking studies and years of fishing, Abernethy says bass, especially big bass, hold in a specific location for a reason.

“You can find young fish anywhere,” he pointed out, “but larger fish are there for a reason. Once bass weigh more than 3 pounds, they are predictable. Always try to determine why you caught a fish, and then you can probably repeat the pattern to catch another good fish.

Generation schedules are available at the U. S. Army Corps of Engineers website.  An excellent boat ramp for fishing the upper lake is off Highway 31 at Cooters Pond. Use the ramp at Swift Creek southeast of Autaugaville for fishing mid-lake, and the ramp north of Edsons to fish near the dam.