Fishing the Mobile Delta for Redfish 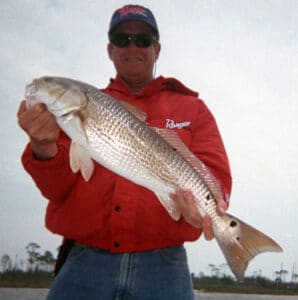 Experience incredible fall fishing for redfish on the Mobile Delta in November. Captain Scott Ritter says catches of up to 50 fish are possible.

Captain Scott Ritter of Dauphin Island is a winning professional angler who has stalked redfish in the Mobile Delta for more than 35 years.

“If our delta system does not get flushed from heavy rains,” he said, “which usually does not occur until after Christmas, November is a fantastic time of the year for redfish. There’s less bait, so the fish are easier to catch on artificial lures, and the fish are aggressive.

“November offers an opportunity to find schools of fish, instead of small groups. Also, you can catch redfish, speckled trout, flounder, sheepshead and largemouth bass in the same location.”

Catches of up to 50 redfish are possible if you find a school, although Ritter’s primary pattern involves hunting small groups or individual fish on the flats. These reds measure 14 to 30 inches.

To find schooling redfish, Ritter watches the flats south of I-10 for birds diving on bait being driven by predators. He also looks for the surface oil slicks created by feeding fish.

If you find schooling fish, and don’t spook them with your approach, an awe-inspiring experience can follow. However, these are hit-or-miss events, so Ritter searches for smaller groups or individual fish on the flats.

“Look for fish,” he said, “on the flats south of I-10 where points are formed by rivers. Another good place is the banks of the shallow bays in the lower end of the Delta. Also, fish structures like sea walls and pilings.”

“Redfish love to swim along the edge of the grass as the water flows in,” Ritter said. “Watch, and you will see their wakes or backs just out of the water.”

Usually, though, Ritter finds redfish by deploying search baits. His favorite: a Johnson gold spoon. Runner-up: a spinner-style bait. “If I had to pick one artificial bait for redfish,” he stated, “it would be a gold spoon.”

He uses the lure to cover water quickly as he drifts over the flats and large oyster beds. Ritter fishes the weedless, single-hook spoon with either a slow, constant retrieve or a jigging motion.

As every bass angler knows, spinnerbaits make great search baits. Ritter uses a variation for the same purpose on the flats and around structure. He also fishes it along the grass edge when the water is rising after a low tide.

Instead of the conventional bass baits, Ritter prefers jig-spinners made by Hildebrandt with a No. 4 gold Colorado blade. His jigs, which he buys separately, weigh between 1/4 and 3/8 ounce and are rigged with Berkley Gulp pogy or swimming mullet trailers.

Ritter works his spinner though the grass with a slow, steady retrieve, or jigs the lure, allowing it to rest on the bottom. “Unlike bass fishing,” he observed, “it can lay on the bottom. If a redfish sees a little flash of gold when you barely jig the spinnerbait, he thinks there’s something to eat in the mud and will suck it into his mouth.”

Even though the daily creel limit allows anglers to keep one oversize redfish measuring more than 26 inches, Ritter recommends releasing these big breeding females and only keeping the better tasting slot fish.