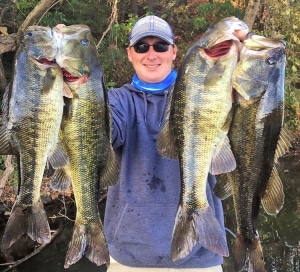 “Lake Jordan is coming back,” Connell said. “It’s on fire! I have had many trips where we have caught more than 30 fish, with six to eight weighing 3 to 4 pounds.”

Located a few miles north-northwest of Wetumpka, Lake Jordan stretches for 18.4 miles and consists of 6,900 acres with 188 miles of shoreline. The lake offers excellent fishing for spotted bass and good fishing for largemouth. The lake’s fertility, forage and growth rates make it an excellent bass fishing destination.

One angler who has mastered this Coosa River lake is winning tournament angler Dustin Connell of Clanton. Connell won Stage Three, Stage Six and Stage Seven of the 2022 Bass Pro Tour, and is the 2021 Redcrest Champion. He is also a Bassmaster Elite Series Rookie, an Elite Series Champion, and a Bassmaster Southern Open Champion. Connell is a licensed Coosa River guide.

“Lake Jordan is coming back,” Connell said. “It’s on fire! I have had many trips where we have caught more than 30 fish, with six to eight weighing 3 to 4 pounds.”

Connell distinguishes himself from other competitors by catching big largemouth to anchor his string. To achieve this, Connell targets bedding fish.

“In April,” he said, “I sight fish for bedding largemouth. Look in the very back of pockets; put your trolling motor down and just look. Then run from pocket to pocket looking. Most of the time you will find one pocket that will hold four or five fish.”

Connell says the best area to search pockets is from Bonners Ramp to the dam. He also recommends Blackwell Slough and Weoka Creek.

To catch bedding largemouth, the guide’s go-to lure is black and blue, 3/8-ounce pitching jig. The time he spends working a bed depends on the size of the fish. For a 6-pounder, Connell may spend 2 ½ hours.

If sight fishing is not viable, he often targets largemouth that are aggressively guarding fry. His primary lures for these protective fish are frogs and swim jigs. To eliminate line breaks, he fishes the lures on 65-pound-test braided line.

“After they spawn,” Connell said, “fish for largemouth in the same areas where they spawned. The fish don’t go far, and this pattern works all day long.

“A swim jig works best because you are trying to imitate a bream. Swim it through the thickest grass (water-willow) you can find. When it reaches the edge of the grass, the bass will roll on the lure.”

If Connell encounters a thick mat of water-willow while working down a grass edge, he will switch to 1-ounce flipping jig rigged with a NetBait Paca Craw. The heavy lure will punch through the canopy of grass to the waiting bass below.

“You don’t get many bites,” Connell said, “but it’s a great way to catch big fish. I have caught bass weighing up 7 pounds by flipping grass mats. The best place to find matted grass in Blackwell Creek.”

When fishing for spotted bass in April, Connell also targets bedding fish. He finds them on main-lake seawalls and humps, and says anglers can catch as many as 40 fish a day. This fast action produces plenty of 3 pounders.

“Look for any type of hard bottom at these locations,” Connell said. Spots spawn in areas where you find gravel and rock.”

To catch spots from seawalls, Connell uses either a Zara Spook or a 3/16-ounce shaky head jig rigged with a watermelon 6-inch worm. He fishes the lures on 12-pound-test line.

“Go from seawall to seawall looking for bedding fish” he instructed. “When you see one, you will normally see three or four more. Move down the wall casting a Spook. If they do not hit the Spook, switch to the shaky head when you see a bed. Spotted bass love to attack a shaky head.”

Connell’s strategy is to fish seawalls early and then switch to humps when the bite slows. His tools for finding and fishing humps are a map and side scan sonar. The humps are 10 feet deep or less. If he does not see fish on the screen, he continues to the next hump.

“Look for both shad and spotted bass,” Connell said. Usually though, if you see shad, spotted bass will be nearby.”

When he finds a promising hump, Connell works a Lucky Craft Pointer 78, which is jerk bait, in a slow cadence over the area. He retrieves the lure in a twitch, twitch and pause pattern.

To book a guided day of fishing with Dustin Connell on the Coosa River, visit his website at www.dustinconnellfishing.com.

During a break from the MLF Bass Pro Tour, Dustin sets out to provide an educational video on how he breaks down new bodies of water that he’s never fished before.