Secrets Revealed for Catching Smith Lake's Bass in May 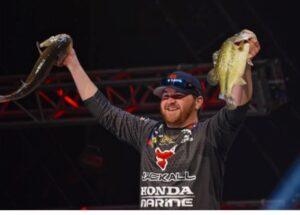 On Lewis Smith Lake, anglers and fishery biologists report bass are reaching new peaks in the size and numbers of fish. Some anglers attribute their improved fishing to the illegal introduction of blueback herring to Alabama’s deepest lake, but fishery management has also contributed to this developing story.

Without question, herring has changed the behavior of spotted bass, and successful anglers have adapted.

“The blueback herring,” explained Craig Daniel of Cullman, “makes bad fishermen good and good fishermen even better. The herring have made it possible for an inexperience fisherman to easily catch five bass weighing 20 pounds when he encounters a school of herring. For the experienced fisherman, it has made fishing easier as they know where the schools are and how to catch the spotted bass around them.”

Daniel is a long-time guide and winning tournament angler. No matter the size or quality of the tournament held on Smith, Daniel is a contender. A few years ago, Daniel and his partner Jacky Flack won the first Alabama Bass Trail Championship on Smith Lake.

Blueback Herring and the Bass Fishery

Located in Cullman, Walker and Winston counties on the Sipsey Fork of the Black Warrior watershed, Lewis Smith Lake covers 21,200 acres and has 500 miles of shoreline. The maximum depth at the dam is 264 feet.

Anglers consider Smith a challenge to fish and through the years many have failed to catch even a single fish measuring more than 12 inches during a tournament. The lake is especially difficult for anglers not accustom to fishing a highland reservoir with its clear water and steep banks.

To improve the fishery, the Alabama Division of Wildlife and Freshwater Fisheries (WFF) established a slot limit 13 to 16 inches on black bass in 1995. Ten years later, they modified the slot to 13 to 15 inches. Anglers must immediately release all black bass in the slot. For the slot limit to continue to restructure the black bass population, anglers are encouraged to keep bass less than 13 inches.

As science-based fisheries management practices began to restructure Smith’s bass population, someone illegally released an exotic baitfish into the lake.

“Blueback herring,” explained District III Fisheries Supervisor Jay Haffner, “were illegally stocked in early 2000s. We saw a few in 2008, and then in 2012 blueback herring populations exploded. When we sample there in spring, herring froth the water next to riprap banks when spawning. Typically, they spawn in April and May.

“The interesting thing about this fish is that although they filter feed on plankton, they also eat fish eggs and very young fish. This is a completely different animal that is not native to Alabama.

“My concern is the long-term impact. Will having another forage fish present disrupt the natural balance of forage and predator fish in Smith, and what are the impacts to gizzard and threadfin shad?”

To assess the impact herring has had on Smith, WFF funded a study through the School of Fisheries at Auburn University. The study was conducted by graduate student Lee Grove.

“Blueback herring are abundant and widespread on Lewis Smith Lake,” reported Grove. “Densities vary, but we find them at all of our sites across the entire lake.”

Through his analysis, Grove did find changes in Smith’s bass.

Haffner continued, “Our recent data shows that small spotted bass are still very abundant. It also shows our catch rates of slot size bass reached an all-time high. We are seeing a lot more older fish. Anglers are releasing slot fish so they can grow larger and older. With the advent of blueback herring, spotted bass are fatter.

“The largemouth population is unchanged. With 21,000 acres, there are only a few thousand acres of decent largemouth habitat, but they are doing well there.”

Patterns for Bass in May

Before blueback herring, spotted bass specialist Daniel fished brush piles. He would sink as many as 200 per year.

“It was a brush pile game,” he said. “You fished 30 to 40 brush piles to catch seven fish and two would be big fish. Now it’s a numbers game. You chase blueback herring around to catch 25 to 30 fish and hope you are lucky enough to get a few big bites. It has changed that much.”

For anglers ready to experience fast action, Daniel recommends fishing the month of May and the first week in June.

“May is the best time to catch a lot of fish,” he said, “as many as 100 a day. But because so many fish will have spawned, it’s not a good time to catch a heavy stringer. Most fish weigh between 1¼ to 3 pounds.”

In May, Daniel finds spotted bass on stair-step rock banks, points and in open water near pods of blueback herring. Jesse Wiggins of Cullman agrees with Daniel’s choice of patterns and also finds spots on gravel or clay banks where herring spawn. Wiggins is one of Daniel’s competitors on Smith.

“When it comes to winning on Smith,” said Daniel, “Jesse and his brother Jordan are on fire.” The brothers have won many tournaments on Smith. Jesse Wiggins is a Bassmaster Elite Series Angler who has won two Bassmaster Opens and has qualified for the 2017 and 2018 Bassmasters Classics. Wiggins now competes on the Major League Fishing circuit.

Of these patterns for spotted bass, stair-step banks do not involve the presence of herring. Wiggins says Daniel excels at finding big fish on stair-step structure.

“If you fish the right kind of bank,” Daniel said, “you are going to catch bigger fish. The right bank has shelves for bedding fish. For example, the shelf may be 3 feet off the bank and only 5 or 10 feet wide. At the edge of the first shelf, which is 1½ feet deep, there is a vertical drop of about 5 feet where it joins another shelf. That shelf then drops off into even deeper water.

“For the shelf to attract bedding fish, it needs to contain either sand or chunky rock. In May, you will find a few bedding fish, but the majority will be guarding fry. Spots stay in the shadows of the steps to spawn and guard their fry.”

To catch fish hiding in the shadows, Daniel positions his boat so he can work a white Zoom Fluke at an angle back to the boat. He says it draws strikes from fish holding on shelves as deep as 15 feet.

Wiggins’ go-to bait for stair-step fishing is a finesse worm rigged on a shaky head jig, which he fishes year-round. He gets things shaking with a 7-foot spinning rod spooled with 12-pound-test braid. To the braid, Wiggins ties a 10-foot leader of 12-pound-test fluorocarbon using a modified Albright knot.

“The color of your worm does not matter,” he laughed, “as long as it is green pumpkin. The braid allows for longer casts, better hook sets and sensitivity. It’s such an improvement; there is no other way to fish a shaky head.”

When bass have ended their guard duty on the shelves, Daniel and Wiggins look next on points. Neither angler uses sonar to scan points before fishing them.

“In May,” Wiggins said, “fish school on points. The type of point does not matter, but the presence of baitfish does. You must fish them to see if they hold spots. Just pull up, make a few casts with a Zara Spook and then move on. Start deep and work towards the bank so as to not spook them if they are there.”

Daniel adds that it’s an excellent pattern for anglers not familiar with the lake.

“It doesn’t matter where the point is on the lake,” Daniel said, “or how deep it is. “It’s just a matter of finding the depth where they are staging.”

Away from points and banks, blueback herring has created an open water spotted bass pattern. Daniel and Wiggins have found it’s possible to catch spotted bass year-round near schools of herring.

“If you find herring,” Wiggins stated, “you have found the bass. They are not always easy to catch, but I like fishing better the way it is now. It’s not consistent, though. When you follow the herring, you may catch spotted bass one day or for a couple of days in a row, and then you may not get a bite for two weeks. But when you do get a bite, you can catch four or five big fish.”

Daniel is selective of the herring schools he fishes.

“We target pods of bluebacks,” he said and it has made a difference in our success. When you find herring, if the spots are not chasing them, it’s not a productive place to catch big fish. It’s easy to determine whether it’s shad or herring busting the surface. Where shad boil on the surface, herring actually jump across the top of the water and look white. When you see baitfish on sonar, shad appear as a solid mark, while herring are not as tightly packed.”

According to Wiggins, it’s important to know the difference so you can “match the hatch.”

“A shad on Smith is about the size of your pinky,” Wiggins explained, “where herring are about half the size of your hand. If you find spots chasing herring, it is easier to catch fish because you can use a lure the same size as the herring. When they feed on shad, it is difficult to match the size of the bait. This makes it nearly impossible to catch fish.”

To match the size of the herring, Wiggins first choice is a swimbait, while Daniel prefers a fluke or a Zara Spook.

Daniel says the latter can draw strikes from spots suspended at depths of 50 feet.

When working banks and points, Wiggins is always watching for spawning herring.

“A pack of herring of about 20 to 40 will be spinning around as they move down the bank,” Wigging said. “When you hear it, you know exactly what it is. Most of the time, you will see bass busting on them.”

Wiggins’ lures for spawning herring are flukes and Zara Spooks.

When it comes to winning tournaments in May, Daniel and Wiggins have different strategies. Daniel concentrates only on catching big spotted bass. Wiggins, however, will try to land a couple of big largemouth under the right conditions.

“If I can find a few 4- or 5-pound largemouths locked on the bed the evening before a tournament,” Wiggins revealed, “we will attempt to catch them with a finesse worm to give us a winning bag. Before trying to catch them, we first catch a limit of spots. ”

Wiggins recommends looking for bedding fish in the back of sandy pockets with bushes. He said they bed as deep as 7 feet.

Anglers unaccustomed to fishing highland reservoirs are often at a loss about where to start looking for fish. On Smith, the greatest difficulty is finding places to catch largemouth.

“For anglers who want to fish shallow water for largemouth,” Haffner said, “the habitat is there. Though it’s still rocky shorelines, it’s just not as deep and steep as everywhere else.

“Ryan Creek on the eastern side of the lake is the most fertile, and it has adequate shallow water with good habitat. Also, both Clear and Lick creeks have good habitat, and they have boat ramps.”

For places to catch spotted bass, Haffner recommends everywhere else. He is not joking and Daniel agrees, especially in May.

“Pick a place on the map,” advised Daniel, put your boat in the water and fish the bank. You will catch spots.”

Haffner says spotted bass habitat abounds on the lower section of the lake. If you want to fish the upper part of the lake, he recommends Crooked, Ryan and Simpson creeks.

Major League Fishing pro Jesse Wiggins uses this shaky head setup 95% of the time when he’s fishing a shaky head rig for bass. Jesse has won a lot of money fishing bass tournaments, and he’s confident, at lakes around the country, the shaky head will catch them 100% of the time, every time.