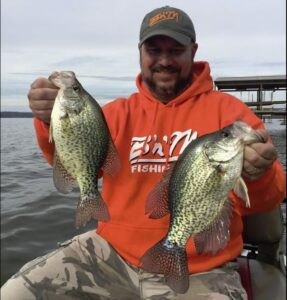 “Many anglers do not think the lake is large enough to hold crappie,” he continued, “but it’s one of the most populated crappie lakes in north Alabama.”

Located in Franklin and Marion counties, the Bear Creek Lakes consist of four reservoirs constructed by the TVA for flood control, recreation and water supply for the northwest corner of our state. They are known as Big Bear, Little Bear, Upper Bear and Cedar Creek and vary in size from 670 to 4,200 acres. Big Bear is the smallest and lies north of State Route 172 between Hodges and Vina.

“It’s more like a creek than a lake,” described Whitehead. “If you place two 20-foot bass boats end to end, they would probably touch the bank on both sides in places. You can actually position your boat in the middle of the creek and cast to each bank.”

The Department of Conservation and Natural Resources reports a dense and healthy crappie fishery on Big Bear; Whitehead’s catches support their research.

“Anglers can expect to frequently catch 50 to 70 crappie a day measuring 9 to 12 inches,” Whitehead said. “The creek produces two pounders, but it’s really known for the numbers of fish anglers catch.”

The guide points out two reasons for great crappie fishing on Big Bear. The lake has an abundance of natural cover in the form of stumps and brush and a lack of fishing pressure. In fact, there are days, to include Saturdays, when he’s the only crappie angler on the lake.

“I don’t see many anglers on the lake in March,” Whitehead remarked. “Most anglers fish Cedar Creek or Little Bear.”

With so many unpressured crappie thriving in this small lake, Whitehead emphasized that anglers can find success using a wide variety of tactics. However, he recommends most anglers start by casting small jigs to the bank or visible wood cover.

“It’s like fishing a bath tub,” Whitehead remarked. “Cast to the steep banks and work the jig at depths from 2 to 16 feet until you find the fish. When they strike, these fish hit hard.”

As for location, he added that there is no best section of the lake to fish. But he does recommend watching for changes in the substrate as you move down the bank.

“Look for a transition in the bottom,” Whitehead instructed. “If you find a 50-yard stretch that’s just a little different, often it’s a place where you will catch the most fish.

“For example, look for a bluff in a creek bend. Where it straightens out and forms a flat, the bottom makes a transition from chunk rock to pea gravel. I don’t know why, but these breaks attract fish.”

Casting for crappie is always fun. Whitehead’s gear is a 6 1/2-foot spinning rod spooled with 6-pound-test monofilament, and the lure is a 1/16-ounce Teezur jig rigged with a Yum Vibra King tube or grub in chartreuse colors.

Even with Big Bear’s abundance of cover, this veteran angler cautions against rigging soft plastics weedless. “You will lose more lures,” Whitehead admitted, “but an open hook catches more fish, especially if they are finicky.”

When guiding other anglers to crappie on Big Bear, Whitehead does not cast jigs, instead he side pulls the lures on long-lines. This technique positions anglers and lines so no one is fishing water already covered by another. From bow to stern, each angler trolls with three rods. The lines span a distance of 22 feet.

To side pull, Whitehead mounts the trolling motor on the side of his boat. Other than moving sideways, the setup is typical of long-long trolling techniques.

The guide fishes the same jigs and line as when casting, but the lures are trolled on 9-foot B’n’M rods designed for side pulling. He trolls the jigs 35 to 40 feet behind the boat and varies speed to control depth.

Whitehead stressed that speed control is critical and uses GPS to maintain a constant speed as the wind changes and batteries wane.

Whitehead recommends anglers use the ramp at Piney Point, which is near the dam on County Road 37.

To fish Big Bear, anglers between the ages of 16 and 65 must have permit. The annual permit is $30 and offers unlimited use of all camping, fishing, swimming and boating areas. A 1-day permit is $6 and a 3-day permit is $10. This is in addition to a state fishing license. Local tackle shops sell the permits, as does the Bear Creek Development Authority. For more details, visit their web site at: www.bearcreeklakes.com.