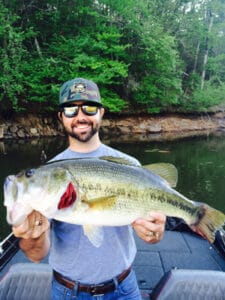 Springtime bass fishing on Wedowee is like a stick of dynamite says Jackson Bonner.

“Harris has always been good in terms of big fish,” said Mike Holly District II fisheries supervisor. “It’s a lake I look forward to sampling because I know I am probably going to get my hands on an eight pounder and occasionally a 10 pounder. Many of those fish are from the 2008 year-class. Generally, the longest growing fish of a year-class live 10 to 12 years.”

In addition to the state’s exceptional 2008 year-class, Holly reports Harris Lake had good recruitment from 2010 through 2013. When Holly samples the lake with his electofishing boat, the number of fish he collects measuring more than 20 inches averages 12 percent, which is triple the state’s average.

Winning tournament angler and Lake Wedowee Tournament Trail director Jackson Bonner confirms Holly’s data. “Harris has a lot of 9 to 11 pounders,” he said. “There are not a lot of 6 to 8 ponders, but we are catching more 4 ½- to 6-pound fish. Anglers can catch their once-in-a-lifetime fish. In fact, Harris probably holds the next state record.”

Since Harris’s waters are deep and clear, Bonner reports the best fishing occurs from February through May when the fish are nearshore. When bass move offshore, Bonner says fishing is poor.

“Springtime is like a stick of dynamite,” Bonner exclaimed. “When water temperatures reach 57 to 60 degrees in February, fish move shallow and the fishing is incredible. In early spring, target fish up the Little Tallapoosa River in muddy water with the warmest temperature. You are not looking for one or the other; you need both. Target shallow rock piles near the channel where bass can change depth quicker than backing out to deeper water.

“As the water warms, move downstream on the river channel and look for flats leading to steep banks. Fish the transition area between the flat and the bank in water 6 to 8 feet deep to catch spawning bass. An isolated stump on a hard bottom in this transition area is ideal.”

Bonner’s favorite lure to fish both locations is a Bagley balsa squarebill crankbait, which he intentionally casts over rock piles and wood cover. Reaction strikes come when the squarebill deflects off Bonner’s targets.

Lastly, if you are unfamiliar with Harris, Bonner recommends fishing the rocky banks between the SR 431 Bridge and the Swagg Boat Ramp. He explained: “If you fish this area in February and March with a 1/2-ounce black and blue jig, you will catch at least one bass over 5 pounds.”