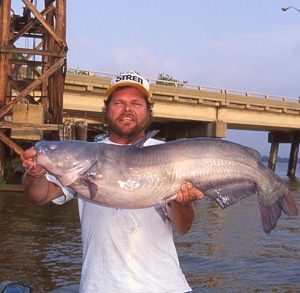 During summer, blue and flathead catfish offer anglers an opportunity to catch both numbers and possibly a trophy. Alabama anglers are never far from great catfish waters.

Enthusiastic anglers across Alabama give many different reasons – size, numbers, aggressiveness, strong fighters and food quality – for their love of catfish, but there’s more.

“I think it’s all those things,” says Elise Irwin who is a research professor in Auburns’ Department of Fisheries and Allied Aquacultures and assistant unit leader for fisheries, United States Geological Survey, Alabama Cooperative Research Unit at Auburn. From her base in Auburn, Irwin conducts research on freshwater fish populations in Alabama’s rivers and streams. When Irwin is not conducting research, you’ll find her enjoying the outdoors hunting or fishing.

“If you contrast catfishing with bass fishing,” Irwin said, “there’s a certain amount of excitement in not knowing how big the fish will be. You could be hooked up with a four-pound flathead or a forty pounder. Knowing that you have a good chance of catching a really large fish is what makes catfishing so exciting.”

Blue and flathead are the largest catfishes in Alabama, and in order of state records, they weighed 120 and 80 pounds respectively.

Even though catfish thrive in our rivers and reservoirs, the probability of catching a record fish may equal that of winning a lottery. Nevertheless, anglers across Alabama frequently land trophy blues and flatheads weighing more than 50 pounds. Some anglers target big fish, while others try for a limit of pan-size squealers, both expecting a big bite. And as Irwin said, you never know.

From introductions, the current distribution of blue and flathead catfish in Alabama have greatly expanded outside their original native ranges. According to biologists and ichthyologists, blues are found in most major tributaries of the Tennessee and Mobile Rivers. They are also found the Blackwater, Chattahoochee and Yellow, but not in the Escatawpa or Perdido rivers.

While flatheads and blues occupy nearly the same waters, flatheads have been introduced into the Conecuh and Escatawpa Rivers and are common in the former.

Some introductions were accidental. For example, blues increased their range into the Chattahoochee on March 17, 1990 when heavy rains inundated ponds stocked with the fish. Anglers have since caught blues from the river weighing more than 65 pounds.

As you can see, Alabama anglers are never far from great catfish waters.

Big fish live in big fertile waters. If you want to catch a trophy, don’t spend time fishing creeks and small lakes. And while blues and flatheads thrive in the same rivers and reservoirs, they favor different habitats.

Blue catfish prefer more current than other catfish and make seasonal moves, sometimes covering large distances. “The specific habitat preferences of blue catfish are relatively unknown,” said Irwin, “but I don’t think blues associate with structure like flatheads. I believe they actively search the bottom for shad or mussels.

“Flatheads, on the other hand, live in the deeper holes in the river with some kind of structure – woody debris or boulders – waiting to ambush prey. Unlike other catfish, flatheads prefer live food.”

Flatheads also leave their ambush areas at night and move into the shallows to feed. Research on the stomach contents of flatheads greater than 24 inches in length found they lived on a diet of shad, sunfish, suckers and other catfish.

On the Tennessee River, Wheeler Lake, is known for producing trophy blue catfish, and in 1996, it’s where Sammy Springer of Rogersville landed 132-pound blue with a gill net.

“Who knows – there could be more enormous catfish living in that lake,” said Springer.  “The catfish I caught is the biggest I’ve ever seen.”  Springer, a commercial fisherman, donated the fish to the Tennessee Aquarium because of its monumental size, which measured more than five feet.

Unfortunately, the fish died. The aquarium then sent the otoliths (a calcareous concretion in the internal ear) to Irwin for aging. Using an accurate technique that she developed, Irwin found the fish only lived 16 years. Clearly, Wheeler is capable of supporting phenomenal growth rates in blue catfish.

One of the most productive and enjoyable methods for catching blues on Wheeler is drifting the shoreline of the upper lake between the Guntersville Dam and Decatur. This part of the lake is riverine so the current – though its flow is reduced in summer – forces shad and catfish into predictable locations.

An easy habitat to find are the crags and crevices below the rock bluffs lining the upper lake. Drift the bluffs in water 12 to 18 feet deep using a fixed-sinker (1/2-ounce) rig with two short leaders at 18 and 36 inches. Fresh cut skipjack is the bait of choice.

Equally effective on the other riverine areas of our major rivers, drift fishing offers anglers an opportunity to catch trophy blues across the state. Long stretches of river-run habitat are available on nearly every river, and it’s especially productive on the Alabama, Chattahoochee and Coosa rivers.

In August, trophy catfish are scarce, but this is a great time to go jugging at night on this river-run lake. Holt offers outstanding fishing for three-pound cats, just right for the skillet.

The tailwater upstream holds fish and is popular, but there’s plenty of excellent fishing along this narrow winding body of water, which stretches for 18 miles. There are many creek mouths and small pockets along the shoreline for fishing jugs.

Fifth in a chain of six Alabama Power dams on the Coosa River, Mitchell Dam controls water flowing into Jordan Lake. The dam is 1,264 feet wide and is located less than a mile north of the Highway 22 Bridge. Unlike the Coosa tailraces above Mitchell Dam, this tail water does not have large hazardous boulders.

“If you want to catch big flatheads,” says Irwin, “the Mitchell tailrace has a tremendous fishery. With our electrofishing gear, we consistently catch 25- to 30-pound flatheads. Unfortunately, we have not sampled areas known to hold big fish, because anglers are always fishing those spots. Those places are next to the dam.”

Irwin says big yellow cats congregate in the tailrace due to the abundance of shad, the dam’s unyielding block to upriver migration and the highly oxygenated water. “Apparently, the dam provides incredible catfish habitat,” says Irwin. “The expansive rocky shoal below the dam offers cover from the current and concealment for ambush.”

To catch big bruisers, start by catching shad with a cast or dip net near the dam. Then anchor on the edge of the deepest washout hole below the dam and cast a live shad into its depths.

When Alabama Power operates their turbines at Mitchell, the water moves to the east bank to create a reverse flow on the opposite shore. Use this opportunity to drift from the bridge upstream to the dam, as the west bank offers excellent fishing during periods of reverse flow.

While a fixed-sinker rig works best for drift fishing, a swivel-set slip rig is best at anchor because you can feel the bite. Make both leaders on the swivel-set less than 12-inches long.

Access to the Mitchell Dam tail waters is available from ramps on either side of the lake just south of Highway 22.

On the Conecuh River from Andalusia to the Florida border, anglers are catching trophy flatheads weighing from 30 to nearly 50 pounds. An average fish, though, will weigh between 5 and 12 pounds.

Suitable for canoes and small fishing boats, the Conecuh breaks the big water, big fish axiom. “When introduced outside their native range,” says Irwin, “flatheads have – at least they have been blamed for – wiping out the red-breast sunfish fishery. The flip side to that is the expanding populations grow really fast.

“If you want to catch a big flathead, use a live sunfish, which is legal in Alabama if you catch the sunfish with a worm.”

Fishing for flatheads in summer on the Conecuh is a night adventure, so scout the river beforehand. Look for deep holes on outside bends with plenty of rocky or woody structure, and for the riffles above these holes. The best riffles and holes lie at the end of long straight runs. Then decide whether you’ll fish from a nearby sandbar or anchor the boat.

If a trophy is your goal, use a rod and reel combo suitable for 85-pound-test-line and cast the largest bream you have into the hole. While waiting for the whiskered monster to bite, fish the riffle – if it’s nearby – with a medium-weight bass rod and small bream. With luck, the flatheads will keep you running from riffle to hole.

Access is available in River Falls off U.S. Highway 84, in Brewton off State Highway 41, and west of Andalusia below the bridge on County Road 42.